You Don't Know What You Have Until It is Gone. 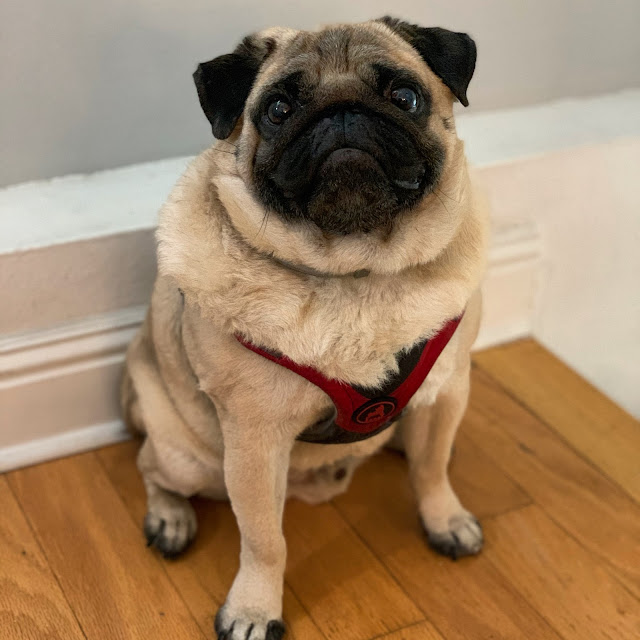 I did not feel well the other day, so I went to urgent care at Scripps Hospital in La Jolla/Torrey Pines at 7:30 PM after we walked the Marco and had dinner. I did a bunch of tests and came home at 11:30 PM. Marco the pug had been walked and fed already - I had a sandwich and gave him the crust and at 12:30 PM I took him outside to walk around a little bit for his nightly "pee" walk. To get him and the cat to go downstairs I normally use a piece of cheese or lunch meat. I brought out a piece of lunch meat. Otis the cat grabbed most of it and left part of it at the top of the stairs. Marco ate it and ran down the stairs to the door to get his leash on. (this is our routine) The dew was already out at a little after midnight and he kept stopping to sniff the trees he normally pees on. He peed on a few then after about 5 I decided to take him inside because it was already past midnight and I was exhausted. I would have gone for a longer walk if I knew that was his last walk.

When I opened the garage door to put him in the kennel he had been sleeping in nightly for the past 4 years, I made an effort to open the two-car garage door all the way up to bring in the cool night air (as I always did). After a few minutes when I felt the air had been circulated and it was cool, I shut the garage door and went to bed. Marco was fine. He had freshwater and was laying on his normal blanket in his kennel.

I came downstairs at 6:25 AM to let him out to pee and go for a "pee" walk. He was gone. His body was stiff in the kennel. He was only 6 years old in May. Maybe he had an underlying heart condition, I will never know. I just feel terrible that I did not hear him struggling, but the A/C was on all night.

You don't know what you have until it is gone. Someone to follow you around the house, and it is only when they are not sitting there next to the toilet while you are in the bathroom that you realize something is missing. No one is waiting patiently on the bathroom rug while I take a shower. No one is begging me for my sandwich crust. I gave him a lot of love, but sometimes that is not enough.

I wish I could have been there for him when he was breathing his last breaths but I did not know. We looked at the video of the day before and he was happy all day and evening playing with his chew toys and jumping from the sofa to the ottoman.

Hug your pets tightly. You don't know you what have until it is gone.

Rest in Peace Marco Sauvage. God knows I always took care of you. I thought of your needs just as if you were my child. The last time we went to a cabin I hired a dog sitter to come and stay with you because I know you get anxiety at the kennel.  I wish it was different. I am never ready for this, no matter how old I get.  May 2014-Augst 20, 2020

I met this really great family owned business in Milan that manufactures and has traditional and unique hardware for handbags and leather goods. In fact, I liked them so much that I decided to help them to bring their business to the USA market. They have great quality hardware and I like the fact that they are a family run business and they can do smaller MOQ for custom hardware! Check out their online catalog here, and if you want to order something please feel free to contact me or contact them directly, I teamed up with them to help with the USA market. Smart Accessori If you need help with your handbag design and collection development, please email me at roccodante@gmail.com   I have been in handbag design for 15 years and can help you design and get your collection manufactured.   We work with leather and non leather materials. For more info on handbag and accessories design check out www.tarasauvage.com Ciao, Tara Sauvage Designer Sauvage Private Label
Read more