August 17, 2019
It was a hot, dry summer in Grant County. My parents operated a large farm about 10 miles outside of Moses Lake. They farmed 450 acres, which included alfalfa, hay, and corn. They had 250 head feedlot for Holstein Heifers and small swine operation with 20-30 head. To make a little more income that summer, they planted 10 acres of watermelon with family friends.

The Weaver* family had a mom, dad, and 3 young boys. The boys always wore their hair parted on the side and slicked back. Their parents drove a small yellow VW bug, and all 3 boys could squeeze in the back seat. At that time, neither family had a lot of money when it came to the Watermelon patch, it was all hands on deck. 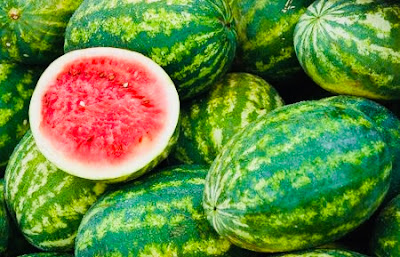 Mr. Weaver was a large quiet man with a kind smile who did his best to keep his boys in line.   Mrs. Weaver was a jovial heavyset woman with a great laugh. She would often work in the watermelon patch hoeing the weeds, She wore a  printed dress with an apron. When it came time to eat lunch, she would pull out homemade peanut butter, and jelly sandwich in a plastic wrap put her hoe down, and give thanks for it right there out in the field,  then sit down and eat it. She was as close to God as they came and even made time to thank the Lord for the peanut butter sandwich. We prayed at the dinner table, but she was the first person I saw pray out in the watermelon patch.

The watermelon patch was behind our house about a half-mile away. When it was our time to change the irrigation lines for the melons, we would jump on our dirt bikes and drive out to the patch. It was hot dirty work, so we often started early in the morning.  I was often responsible for changing the handlines with my older sister Angela. We wore big rubber boots to work in the fields.

Grant County had a significant irrigation canal system. In the afternoons we would use used tractor tire inner tubes to float down the canal. My dad would get old inner tubes from tractors from Les Schwab tires and patch them up. We would pile the inner tubes into the back of the truck and drive a few miles away, we could start on one end of the canal and float down for about an hour over before the canal hit the back of our property. We would hold each other's feet to form a chain when going through rough patches. The ditches were about 2 or 3 feet deep, the water was cold, the water skippers were abundant, and it was our own lazy river. We did not wear sunscreen and had a great time.

When my dad was out changing the water in his other fields, he would stop by the watermelon patch and bust open a ripe watermelon and eat the heart out. The dry, sandy soil was perfect for growing watermelons. We had to help change the handlines twice a day to irrigate the watermelon patch. This meant unhooking each pipe one by one and carrying them by hand to the next hookup, trying to make sure you had the 15 or 20 aluminum pipes all lined up before you turned the pump on again. For a skinny adolescent, it was hard work. The work was labor-intensive, a lot of walking and carrying, if you were with another kid, each kid could carry one end of the pipe. My dad could take a tube by himself. Sometimes after we turned the water on after our work was done, we would run through the sprinklers. To reach the field where the watermelon patch was we would ride our dirtbike, it was a Trail 90 dirt bike, small with an automatic clutch, easy enough for an 11-year-old girl to drive with her 6-year-old sister on the back seat. My dad rode a more giant dirt bike, a Suzuki 250 to get out to the watermelon patch, and a few time he was able to fit my younger brother and 3 Weaver boys plus our cocker spaniel Sugar on the bike and drive off. The probably did not go very fast or very far, but the boys thought it was the coolest thing.

To sell the melons, The Weavers used the honor system in their small town. They would park an old truck in front of their house full of watermelons. There was a scale to weigh the melons by the pound, maybe 7 cents a pound, and then the buyer put a $1 in the coffee can. To sell a more significant load off my dad contacted his brother Rick in who lived outside of Seattle and was in the produce business, and he was able to secure a commercial buyer that bought a 16' truckload of watermelon.

Once the watermelon patch was pretty much picked over, my dad let his cows out into the field to eat up what was left of the rinds.  Overall, the watermelon crop was a bust financially, but what great lifetime memories from that summer!