Do You Own Your Voice?

January 15, 2018
There is a quote I found from a writer I follow. Her name is Justine Musk. She is the first wife of Elon Musk, the guy who invented a bunch of things like Paypal and Tesla.

When we talk about finding your voice, we’re talking about your ability to own it. Your voice is not just what you say and how you say it, but who you are.-Justine Musk


I love this quote because it reminds me of myself. I have been trying to find my voice for years. It has always been there but it was stifled. It was like I grew up with a piece of masking tape on my mouth. It started on the bus. I would ride the bus to school, sometimes an hour there and back. The kids on the bus would make fun of me, call me terrible names, throw spit wads in my hair. I just sat there. Mute. Full of rage on the inside, but shy and mute. I felt like I had to take it. I was not worthy to speak up for myself. I was shy and ashamed. I felt ugly, small and weak. I had nothing to say. The rage build and I internalized most of it. I had self hatred which turned into self-loathing and then  anxiety and depression which came out later as a young adult.

It goes on. Why as women and girls are we afraid to use our voice?

For me it was the culture, it was the religion. Women and girls were second class citizens who had no voice.

I travelled, I went to college, I did all these amazing things. I found my voice in writing short stories and keeping a journal. I dated a few people, I did not want to marry anyone because I did not want to give up my freedom or my voice that took me so long to find.

When I was in my late 20's I had to quit my first job due to sexual harassment on the job. I called my dad and told him about this creepy guy at work. He told me to quit. I walked out and never came back. I found a roommate who was doing cocaine on my table. I walked out and never came back. I used my voice a little, but mostly I would just leave. My voice was in my feet. I would just walk out.

Now I am older. I use my voice more now than before. I still get pushback from using my voice. It is 2018 and I still get the pushback. Who is it from?  I analyzed all the people who gave me negative feedback for using my voice and noticed were other women. It was not men. Women who probably don't use their own voice. Those are the ones who call other women disrespectful and bitches for using their voice. Maybe they don't believe it is OK to use their own voice. I don't know.

What I do know for sure is that I am never going to give up my voice to please anyone again. I will no longer be the girl on the bus, the cute little girl with spit wads in her hair, her head down in shame wishing she did not exist, believing she had no right to exist.

It is women who tell me I am disrespectful and out of line for using my voice. I own it. I stand by every word I write or say.  Now that I have finally found my voice, I will not ever lose it again. Instead of running from situations that intimidate me, I will use my voice. I won't run. I will continue to use my voice and I am sure I will continue sometimes be incorrect or get knocked down. That is OK. I am no longer on a school bus.

As Justin Musk said, "your voice is not just what you say, and how you say it, but who you are." 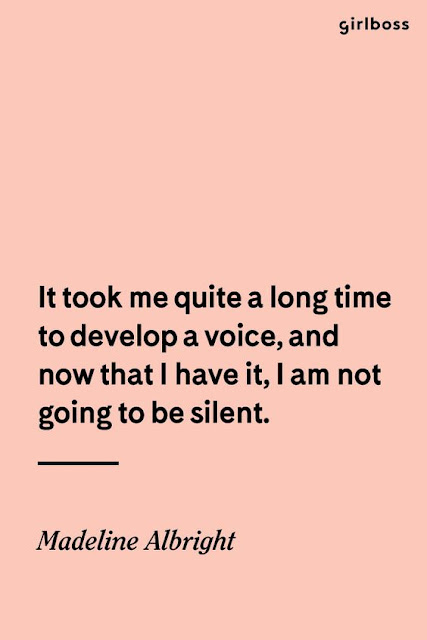