The Dichotomy of my Day..from La Jolla to DTLA

September 14, 2015
The public school La Jolla Elementary is across the street from a private school.   The parents share the street for picking up and dropping off.    For the past several months I have been working in down town Los Angeles Tuesday-Thursday as the Design Director for a fashion company. On the first day of school I stayed in town so I could drop off my 5th grade daughter.  By the time we arrived, it was 8:05 and classes started at 8:15 am.  I could not find a parking space as I drove up and down the street a few times and back.   There was a few open spots at in a 3 minute loading zone near the school.  I parked my car, put on my hazards and we jumped out.   My plan was to walk Mia to her class and then come right back, it would take about 5 minutes.

There was a middle aged woman in a dress and sunglasses standing near the loading zone which is on the public street.  She said, "You can't park here."  I said, "I am not parking.  I am just dropping off, but I am going to walk her across the street to the class and be right back."   The lady said, "I will call the authorities if you leave your vehicle."  I said, what are you going to do?  She said she was going to call 911!  Wow.  The threat was so ridiculous,

I proceeded with my daughter to walk across the street to her class.  Mia was all freaked out I was going to get arrested.  It took a few minutes to find her class, she saw her friends and gave me a hug and I went back to my car in about 3 or 4 minutes.  The lady was still there.  She did not say a word. There was no policeman waiting to arrest me.

According to the Institute for the Study of Homelessness and Poverty at the Weingart Center, an estimated 254,000 men, women and children experience homelessness in Los Angeles County during some part of the year and approximately 82,000 people are homeless on any given night. Unaccompanied youth, especially in the Hollywood area, are estimated to make up from 4,800 to 10,000 of these.


Near my office in DTLA there are several regular homeless people.  On one hand my heart goes out to them, on the other hand I don't enjoy their company.   One of them is a Mexican guy who stands under the freeway and flashes his erect manhood at women getting on the 110 North.  After he showed me his penis I saw him in our office parking lot a few days later.   Needless to say, I was not thrilled.   In the past several months, I have been called a bitch, a whore, sexy and other things while walking to get a coffee or to lunch near my office.  Now I rarely walk to get lunch.  I would rather drive than deal with crazy people.

Last month a homeless person camped out in front of our office doorway with all his possessions.  At 5:30 he tried to barge into the inner offices.   He would not leave and scared the ladies that work at the front desk.  The company installed an inner door with a combination to protect the staff from that happening again.  Last week they were installing more security cameras.

Earlier this summer, a homeless person passed out in our parking lot.  Several hours later the LA County Coroners office came to pick up the body.  He was dead. 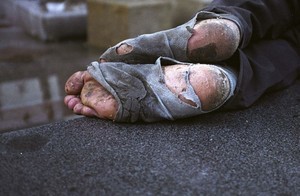 This is the dichotomy that I live in.  On the weekends I live in La Jolla, one of the most upscale and beautiful seaside communities in the United States.     Some of the wealthy people that live here live in a bubble.  For example, they threaten to call 911 on La Jolla moms that are dropping off their young kids on the first day of school (because apparently I am taking up space that could be reserved for the ultra rich people that need to drop off their kids at the private school)

I don't really know the point of this post yet.  I don't have to leave the United States to witness extreme poverty and deprivation and wealth in the same day.  I experience it every week.  It is both absurd and fascinating to witness.