March 04, 2013
My first job was shoveling pig manure on my fathers pig farm in rural Eastern Washington State.  We had to clean the pig pens out in between sows that were ready to give birth.  If I wanted some quick cash I would help my dad out.  He would pay me $4.00 per hour to shovel manure out of the pen.  It was hard work and the smell was to die for.  That smell is nasty, but after you are out in it for about 30 minutes or so, your nose would get used to it.

I would wear my yellow Sony Walkman and listen to Madonna while I was shoveling pig manure...it was fun times.   I had to wear heavy rubber boots to keep the manure off of my feet, but it would still splatter on your clothes.   It was really disgusting.  There would often be maggots hatching in the manure and often dead carcasses of baby piglets that did not make it.   But I would not think about the grossness factor, it was all about the money.  Now you could not pay me to do that sh$%^ for a living, but back then it was all about raising some cash to buy clothes or gas.

I wish I would of taken a photo.   I think it built in me a strong work ethic.  Now when I have to deal with a pain in the ass client or a really crappy day at the office...I can deal.  But I do like being my own boss.  When I shoveled shit for pocket money, I knew I could not be fired.   My Dad just wanted me to do the job and be done with it.

Have a nice day and remember if you are in a crappy day job..keep on trucking my friends, it could be worse...remember the day when you were shoveling shit listening to Madonna.  (Out of all my friends, I can't think of anyone that can compare with a shitty first job like mine..ha ha.) 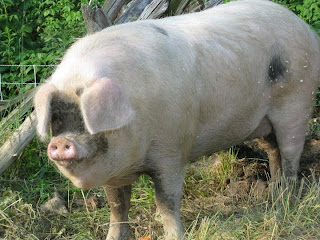 I met this really great family owned business in Milan that manufactures and has traditional and unique hardware for handbags and leather goods. In fact, I liked them so much that I decided to help them to bring their business to the USA market. They have great quality hardware and I like the fact that they are a family run business and they can do smaller MOQ for custom hardware! Check out their online catalog here, and if you want to order something please feel free to contact me or contact them directly, I teamed up with them to help with the USA market. Smart Accessori If you need help with your handbag design and collection development, please email me at roccodante@gmail.com   I have been in handbag design for 15 years and can help you design and get your collection manufactured.   We work with leather and non leather materials. For more info on handbag and accessories design check out www.tarasauvage.com Ciao, Tara Sauvage Designer Sauvage Private Label
Read more

Ciao! I get a lot of emails from other start up handbag designers looking for free advice.  I don't usually give out free advice but sometimes if I am feeling generous I will blog about it or if you call me at the right time I will give out the information over the phone. Often I get asked where I get my handbags made.   I don't give out names of my overseas factories, but I can list a few of my USA factories.   I have made handbags with Portchester USA in Long Island City.   I did like the quality and I did like the owner of the factory.  He was helpful, cheerful and honest.   (I can't say the same for all handbag factory owners.)  I don't know how he is doing today, I will have to call him to say hello.   He only makes leather handbags, so don't contact him if you want to make fabric bags.  For more information please see their website www.portchesterusa.com and tell them Tara Sauvage referred you. I will add more to my list in a future blog.  The h
Read more